Last week I got my father’s workbench put back together.

It was one of the first things he built. He never had very much space to work in, and so this bench was a good choice for him.

The plans for the bench can still be purchased, here: plansnow.com/wbenchfold.

I don’t find it a joy to work on. It’s a bit too high, and never feels as stable as I’d like. It served him well though for quite a few years.

I was also always fascinated by the concept. Collapsed as it is here, it protrudes about a foot from the wall. Before I took up woodworking, I thought the design could be adapted for a kitchen workstation, where space is at a premium.

Here’s an exploded view, grabbed from the plans: 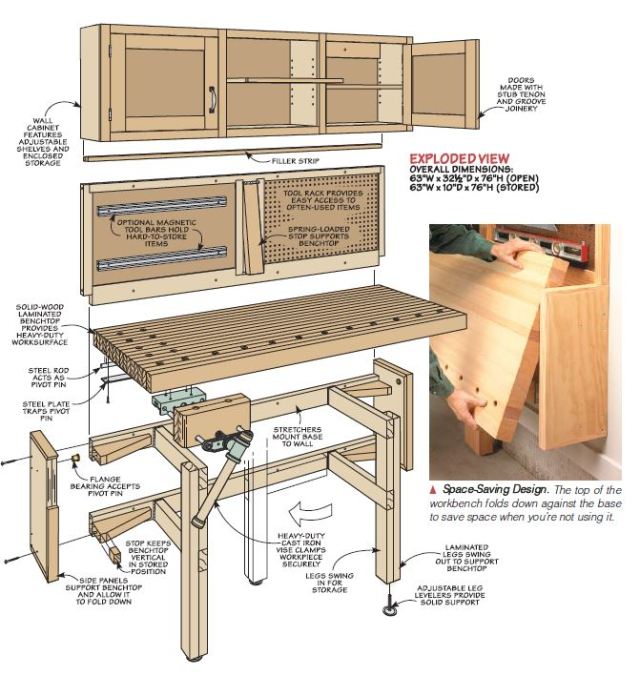 Over the years he modified it, adding a twin-screw-of-sorts face vise instead of the single, and a tail vise. The tail vise interferes with the leg on the right side being able to extend all the way. The two face vises don’t make a good twin screw set-up. In addition, the two additional vises make it way heavier than it was meant to be, meaning that setting it up is quite a bit more of a chore than it’s supposed to be. He had installed a rope and pulley system over the bench to make that easier.

My current plan is to use it as a dedicated joinery bench. The height is right for it. I haven’t decided for sure, but I’m thinking about removing the shoulder vise and reducing the bench down to one face vise again. That’ll involve reducing the width of the top (or building a new one), where it was cut out to make room for the shoulder vise.

I really like the tool storage. Everything is right at hand.

Since getting this set up last week, I’ve purchased the lumber and started work on my Nicholson bench, following the Naked Woodworker DVD from Mike Siemsen. I’ve taken a few photos, lightly documenting the process and showing a real doozy of an error.

This entry was posted in Work Shop and tagged workbench. Bookmark the permalink.

A personal tribute to digital narcissism

Mostly about Sharpening for Woodworkers

Andrew's View of the Week

Andrew's view of the world in poetry, prose, and pictures

The Project Diary of Alysia DeVries

An amature woodworker who works as a data analytics consultant

The great secret of education is to combine mental and physical work so that the one kind of exercise refreshes the other.

Adventures of an Imperfect Man In Search of a Handmade Life

While The Glue Dries

Programmer by day, at night I become...The Woodwork Geek!

Tools and Woodworking for fun

A woodworking blog by Bill Rittner

Making what I need with my hands.

Just trying to leave something behind.

In which 1snugthejoiner writes about woodworking, publishing, house renovations, cats and Shakespeare (don't worry – that last one is rare).