I recently made a trip South to see my family, and came back with a car load of tools.

It wasn’t very long ago at all that I looked at the list of essential tools woodworkers should have, and wondered if I shouldn’t find some other hobby, as these would take ages, and a small fortune to accumulate.

If you’re in that place now, take heart. There comes a point when the tools just start to find you.

As I ran out of space in our Corolla to fit everything, I wondered whether I hadn’t passed some threshold, and was no longer a woodworker that liked old tools, but an old tool collector that dabbled with wood-working. The jury is still out. I’ll strive to just make sure I’m enjoying myself regardless, and not worry about it.

Some of the tools acquired belonged to my grandfather, who worked as a carpenter. My No. 5 Jack Plane, which I’ve had forever, belonged to him. Now I’ve brought home his old toolbox, and a number of additional tools that were his. The toolbox doesn’t offer any windows into the highly skilled methods of craftsmen of old. What it shows is someone making a living, and not spending money where it didn’t need spent. He built this box while working in a shipyard during World War II, out of plywood and nails. He used it the rest of his working life. My mother talks about him coming home at the end of the day, this thing slung across his shoulder. I’m going to insure that its condition doesn’t deteriorate, and make small repairs as needed to keep it in one piece.

I also have a couple of handsaws that were his – they’re in rough shape. Both are Disston’s, but neither are very old. I think one that was clearly a favorite – it’s been sharpened down to under 4″ wide, is probably from the 60’s. There’s another Disston that never saw much use that I think may be as recent as the 70’s or even later. I also took a double-sided pruning saw that was likely not used by my Grandfather but instead by my Grandmother. There are a few hammers, an old brace, and stuff.

I’m hoping I can get this breast drill that we think was his cleaned up enough to work. It’s rusted solid right now. I’m not even sure all the parts have been found yet.

This small “fastener toolbox” I remember from when I was a kid. It might not be the easiest way to keep fasteners at the ready while at your bench, but it’s great for when you need to take the tools to the work.

I don’t know what this tool is. That’s a flat-head screwdriver on the end. 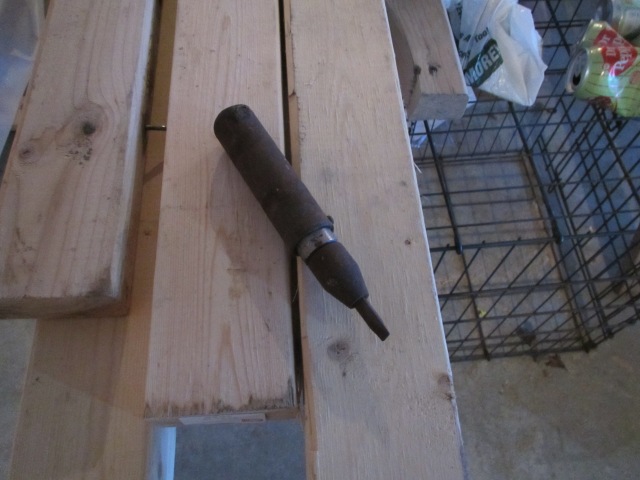 This metal vise was left behind by one of my uncles. I’m sure it will come in very useful, once cleaned up.

My stepfather worked as an auto-mechanic when I was growing up. He’s also always had a fascination with old tools. So at auctions or other sales, when something catches his eye he often comes home with it. I helped make a little additional space for him to store stuff by taking a couple braces and some bits off his hands, as well as a small saw sharpening vise. 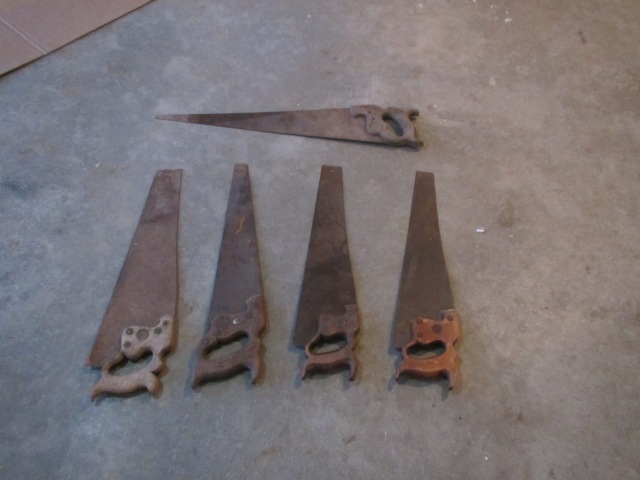 Somewhere he found this old, um, “table saw.” You take an electric motor and attach it to this by way of a belt, and you’re up and running.

I’m very excited to get this mounted somewhere and put it to work. A manual drill press. It’s big and heavy, and we think it works as is. 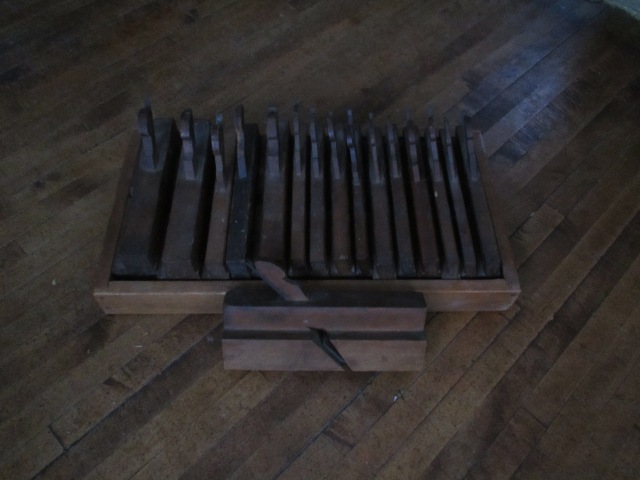 After visiting with my mother and stepfather, I traveled to Kansas City to see my father. He took up woodworking as a hobby a few years before I did. The day I arrived we went to a meeting of the Kansas City Woodworker’s Guild. Very impressive place.

Waiting for me when I arrived at his house was my Christmas present this year, a tool chest he made for me out of cherry. 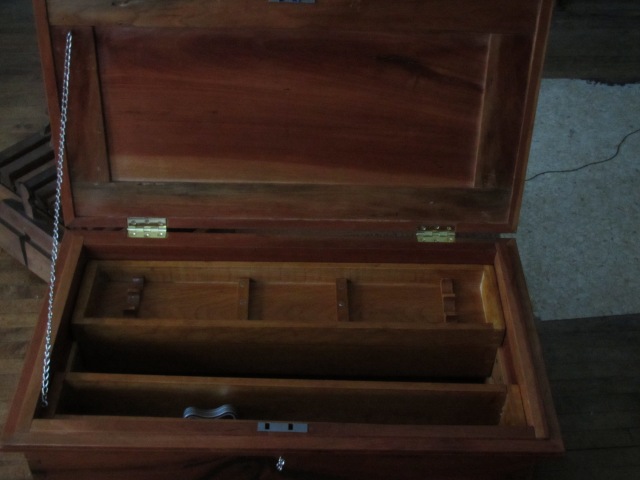 I’m still haven’t decided if this chest will go near my workbench, or be a chest that I use to keep tools stored away from the weather in. It’s very nicely finished, and it’s going to be hard to decide it’s OK if it gets scratched and dinged up, as it will if I start working out of it. Regardless, it will be treasured, and passed on to future generations.

I’ve got several more months of rust removal and sharpening ahead of me. Starting to wonder if we shouldn’t have built a larger garage….

This entry was posted in Non-Germane, Tools. Bookmark the permalink.

10 Responses to Tools and Family

A personal tribute to digital narcissism

Mostly about Sharpening for Woodworkers

Andrew's View of the Week

Andrew's view of the world in poetry, prose, and pictures

The Project Diary of Alysia DeVries

An amature woodworker who works as a data analytics consultant

The great secret of education is to combine mental and physical work so that the one kind of exercise refreshes the other.

Adventures of an Imperfect Man In Search of a Handmade Life

While The Glue Dries

Programmer by day, at night I become...The Woodwork Geek!

Tools and Woodworking for fun

A woodworking blog by Bill Rittner

Making what I need with my hands.

Just trying to leave something behind.

I went to woodworking's funeral a few weeks ago. It was a nice service..there were lots of flowers and a luncheon was held afterwards..

In which 1snugthejoiner writes about woodworking, publishing, house renovations, cats and Shakespeare (don't worry – that last one is rare).